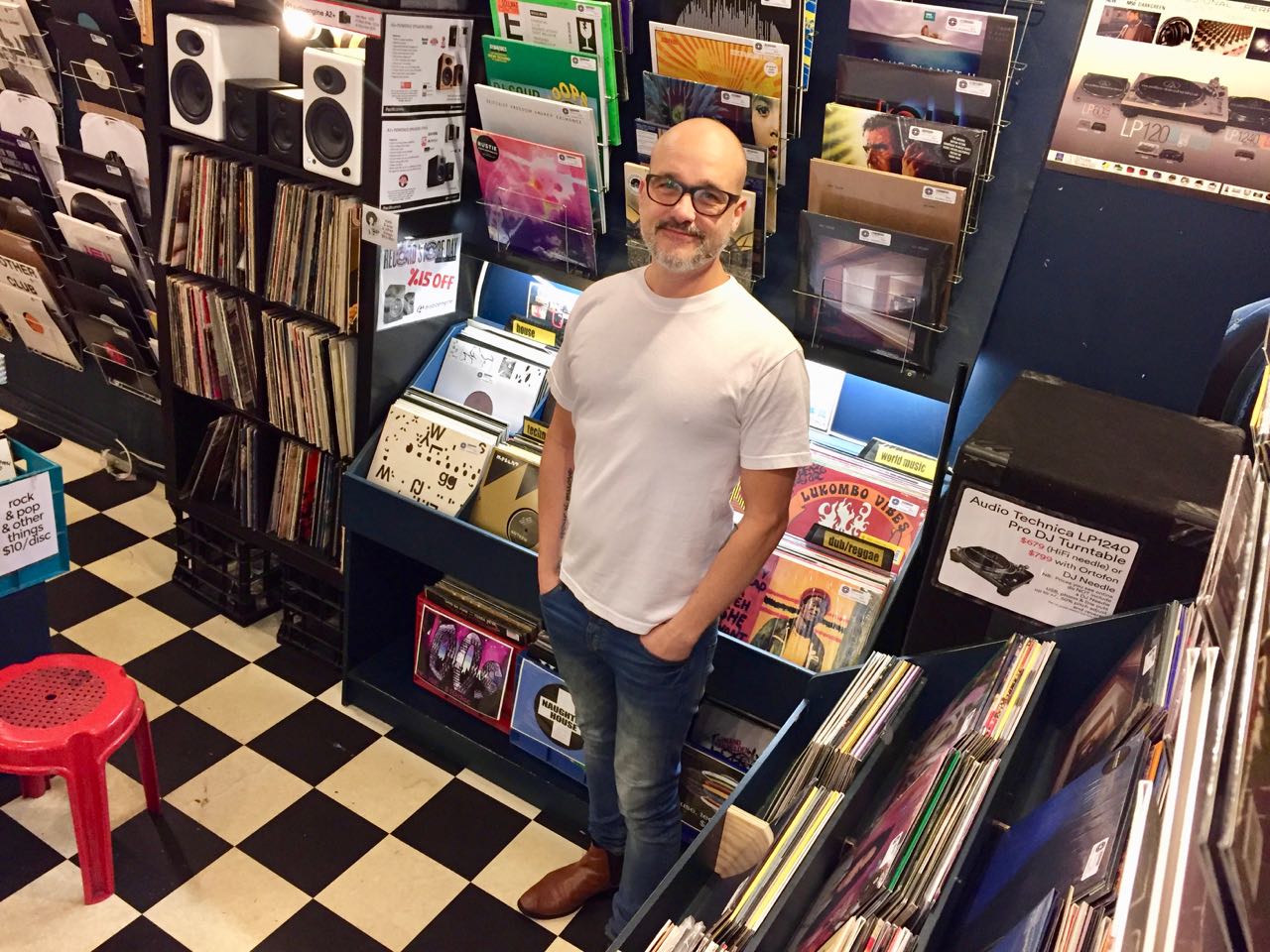 The Record Store in Goulburn Street, Darlinghurst is where you find Stephan Gyory (after 11am, “we keep civilised hours here”) surrounded by vinyl records of almost every genre (“but we don’t want your old Trance or Prog vinyl”)

He’s been in the vinyl record trade since he started at BPM Records in Oxford St (above the old Army disposal store) in 1994. At one stage, in the late 90s, there were fourteen dance music record stores in Darlinghurst. Sometimes at night in Darlinghurst it’s now difficult to find fourteen people.

But Stephan is optimistic about the future of the Oxford St precinct. “I run the local Chamber of Commerce. I’m currently on the City of Sydney late-night advisory panel, which is looking at how to diversify nightlife.”

But is the Oxford St too far gone?

“We lost the Flinders and it came back. We lost Q Bar, but that place was going to fall through its own floor anyway, we lost The Shift, and it’s just been bought by a group that are going to reopen as a club. This area and the community here is very resilient. The thing about Oxford Street is if you walk up it, Yeah, it’s a bit tatty, but if you walk across it, you don’t notice, because there’s lots of really cool things around it.”

So how about some advice to anybody thinking of opening a record store in 2018?

“Don’t go back in time and open a record store in 2003 because the following ten years will be terrible.”

So why do you still do it, with your not-so-silent-enough partner?

“Fucked if I know! Vinyl turned the corner probably five years ago and that was a function of music becoming a utility. When music went to streaming it just became like water and electricity. I think people seek to have relationships with music beyond pure consumption and the utility model is just a consumption model. But why am I in retail. I don’t know.I wouldn’t recommend it to anyone. But I am my own boss and I don’t have a mortgage, no kids, and it’s a very fun lifestyle.”

Stephan caters to most styles of music at The Record Store, but there is one type of person he won’t tolerate in his shop.

“We don’t serve audiophiles. I mean, they don’t come here because we’re a very pedestrian shop to the point where if someone comes to us with a collection of rare collectible vinyl, we’ll send them to another store. When I buy second-hand, I want to be able to sell it for not very much money. I want you to be able to come in and buy more than one album. I don’t want people coming in with magnifying glasses looking at the grooves because they’re a fucking pain in the ass. They might be very lovely people but I don’t have the time or patience. I think I’ve only ever had to kick three people out of this store in 20 years, and all three were like that.”

So you and your magnifying glass can tell your story walking.

But a final word on musical taste from Stephan.

“I used to be quite intolerant of music I wasn’t into. This music is better than that music and then recently some Liberace got through and into our rock and pop section. Ordinarily I would give that stuff to Vinnie’s. This young Chinese girl came in, a full vinyl junkie, she bought Barry Manilow, Liberace and Richard Clayderman, and I thought”, “you know what these records bring you joy, and you’re into this format as much as I am.” “Cool.”

Chris from Waterfront records in his Newcastle West record shop